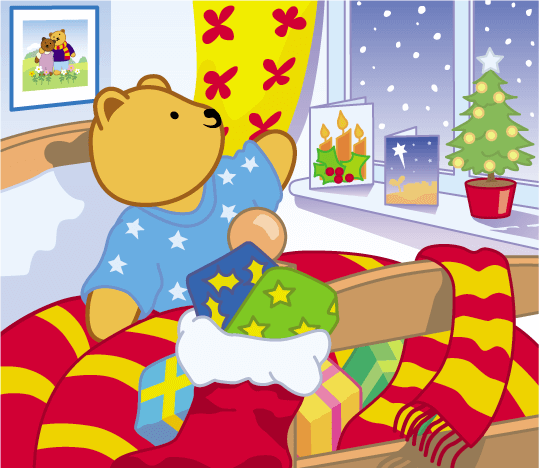 It is Christmas Day and Teddy Horsley is a very excited bear. 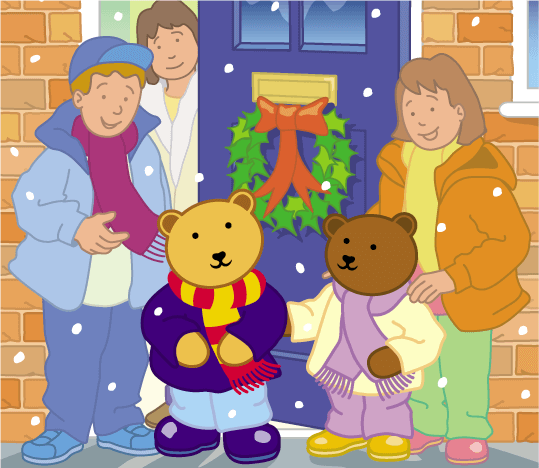 Teddy Horsley gets dressed and goes out with Lucy, Walter and Betsy Bear to hear the Christmas story. 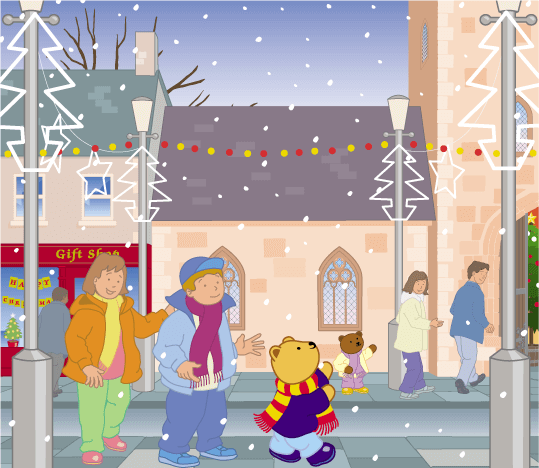 Mr and Mrs Henry lead Teddy Horsley past the shops and Christmas trees until they come to the church. 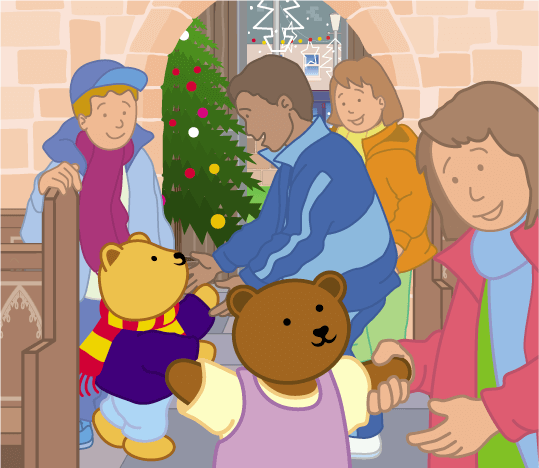 Inside the church, Teddy Horsley and Betsy Bear meet with their friends to take part in the Christmas play. 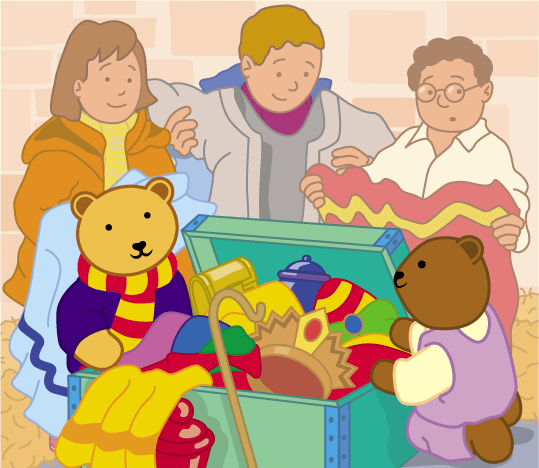 They choose costumes to become shepherds and kings, angels and innkeepers, Mary and Joseph. 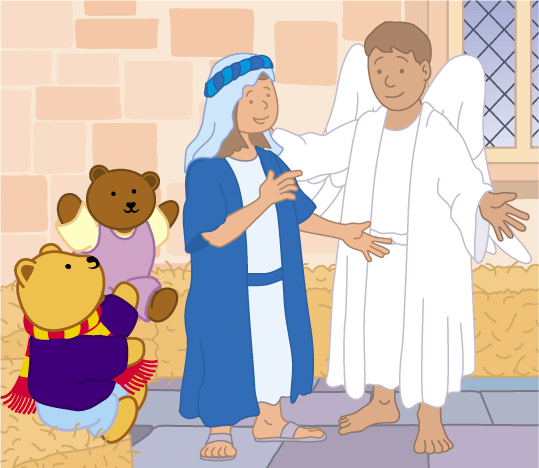 The story all began when the Angel Gabriel visited Mary and brought her news of great joy. 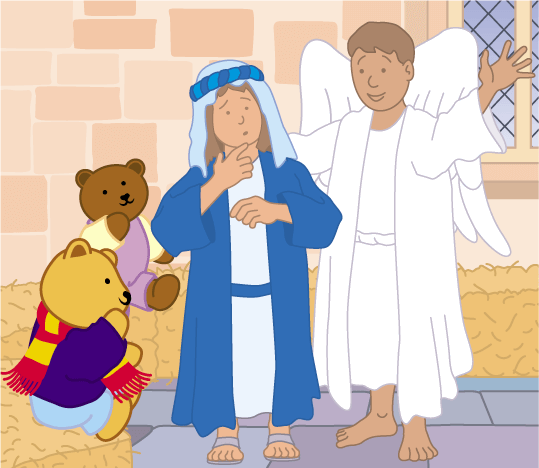 ‘Do not be afraid,’ said the angel to Mary. ‘You will have a baby boy and name him Jesus’. 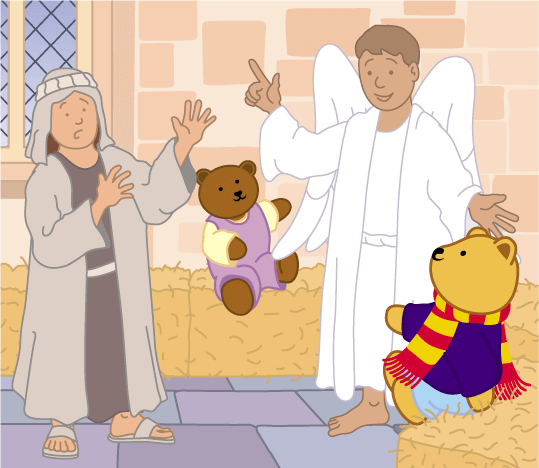 The story all began when the angel of the Lord visited Joseph and brought him news of great joy. 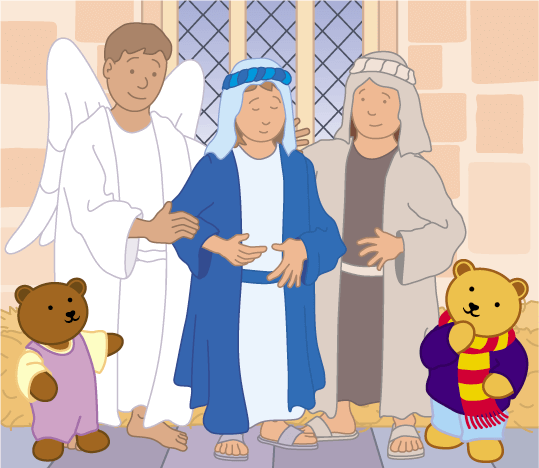 ‘Do not be afraid,’ said the angel to Joseph. ‘You will marry Mary and take care of her son Jesus’. 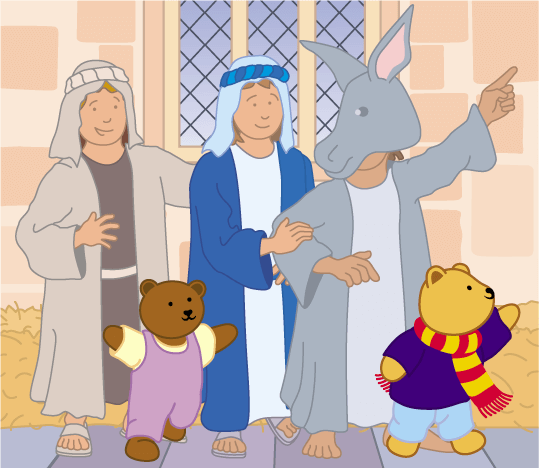 The story developed when Joseph and Mary made the long journey from Nazareth to Bethlehem. 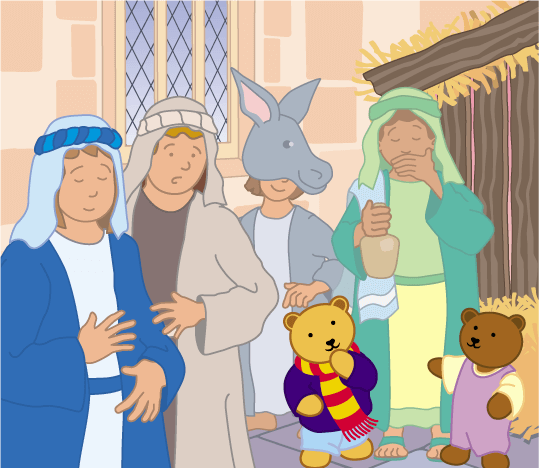 Joseph and Mary went to the inn to find a comfortable place to stay and somewhere safe for their baby to be born. 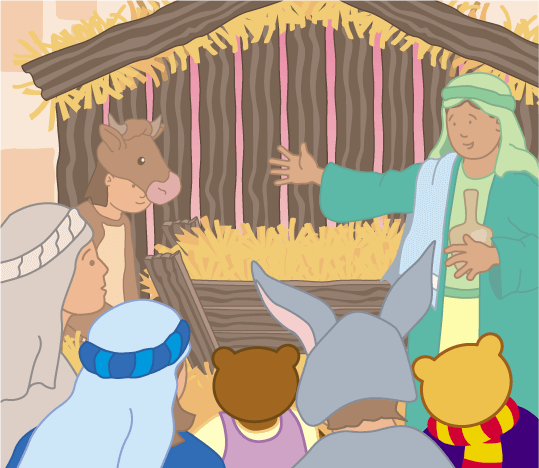 The story developed when the innkeeper turned Mary and Joseph away to find shelter in a cattle shed. 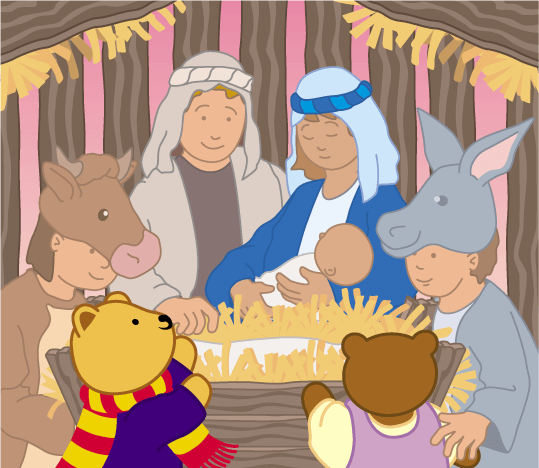 That night the baby Jesus was born and placed in the cattle’s feeding trough, while the animals looked on. 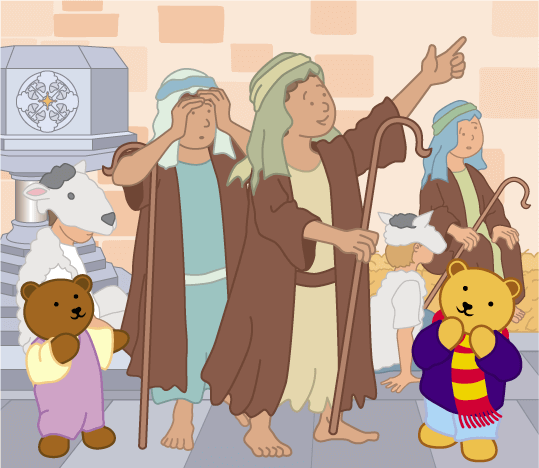 The story was proclaimed to the world when the shepherds looked away from their sheep and gazed up into the night sky. 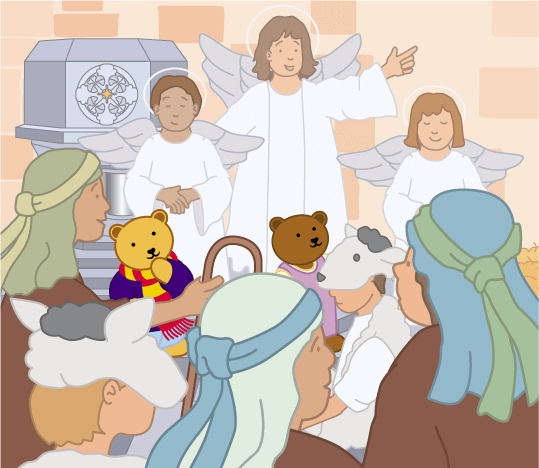 The angels shouted aloud that the Son of God had been born in Bethlehem and told the shepherds to go and see. 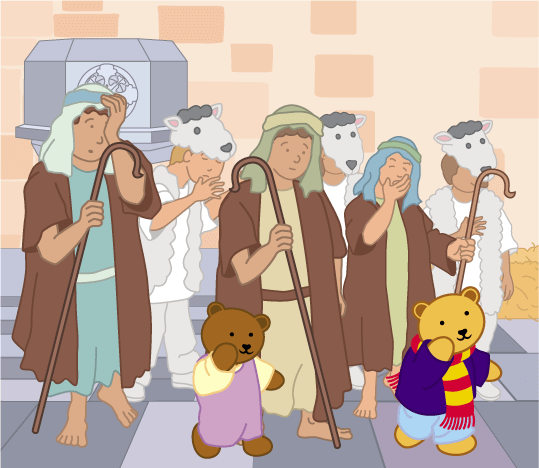 The story was seen to be true when the shepherds followed the dusty road to Bethlehem and found the cattle shed. 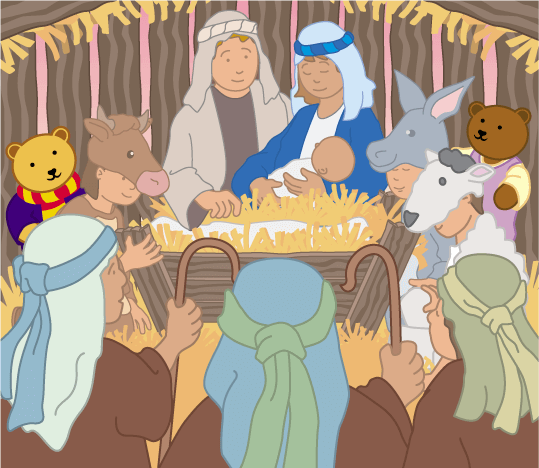 The shepherds went in and discovered it all as the angels had said, seeing Mary, Joseph, and the baby Jesus. 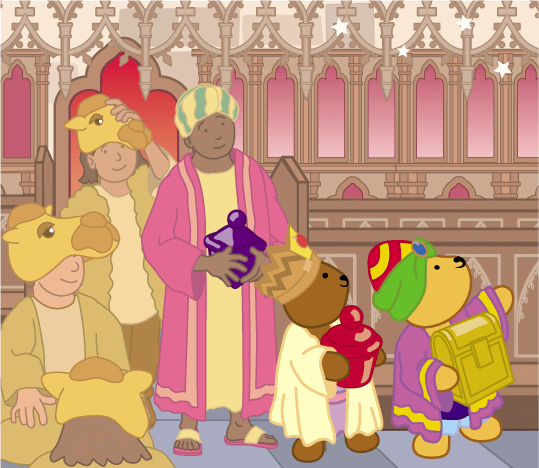 The story was proclaimed to the world when the wise men looked away from their camels and gazed up into the night sky. 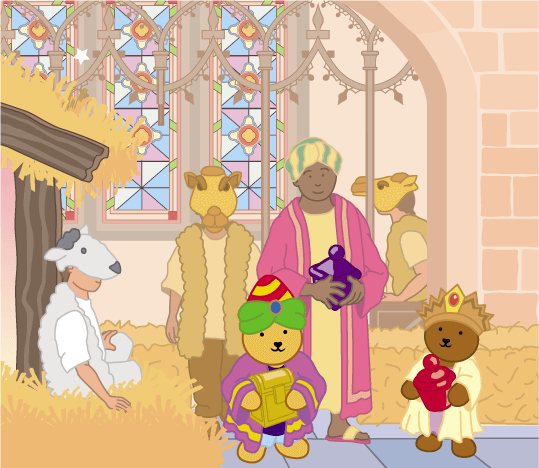 The bright star in the sky shouted aloud that the King of kings had been born in Judea and told the wise men to go and see. 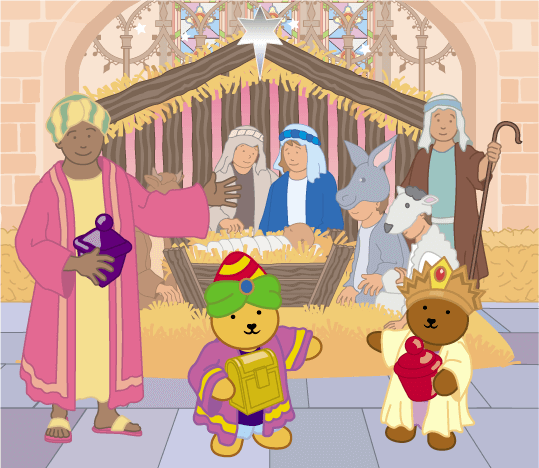 The story was seen to be true when the wise men followed the star and came to the place where Jesus was. 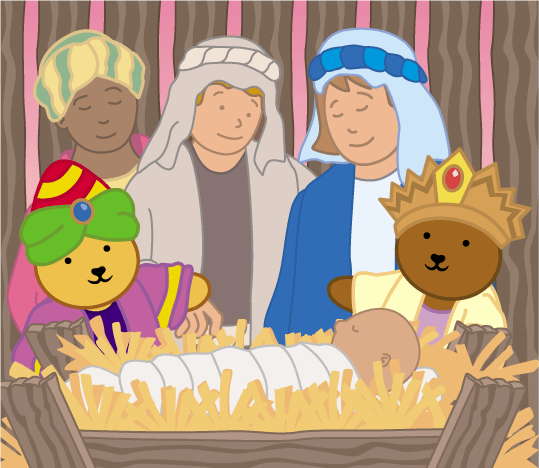 The wise men went in and found it all as the prophets foretold, seeing Jesus, Son of God and King of kings. 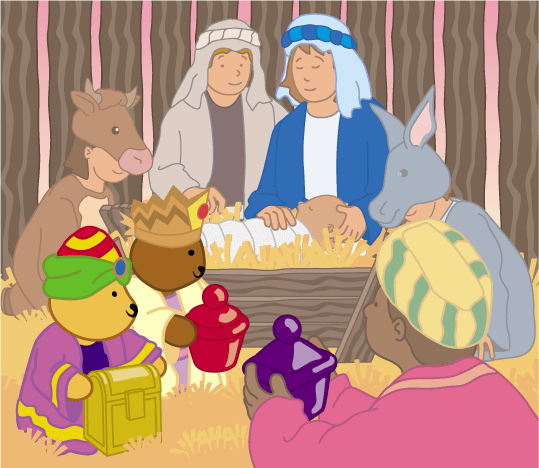 The story found its response then in the hearts of people when the wise men knelt and presented their gifts to Jesus. 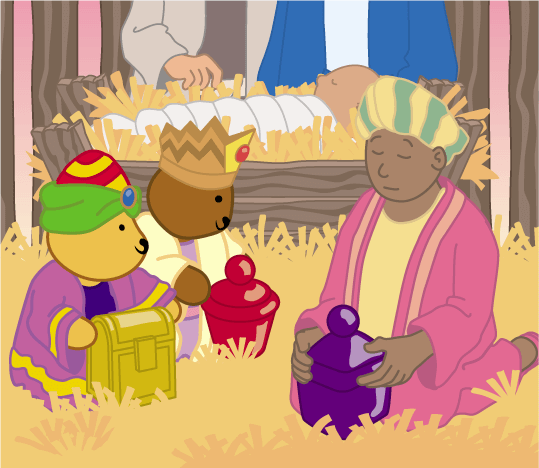 They placed at Jesus’ feet the gold of kings, the frankincense of priests, and the myrrh of ordinary people. 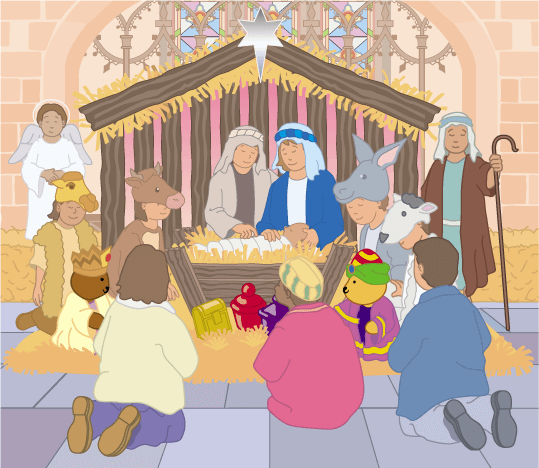 The story finds its response now in the hearts of people who kneel at Jesus’ feet today and offer themselves to him. 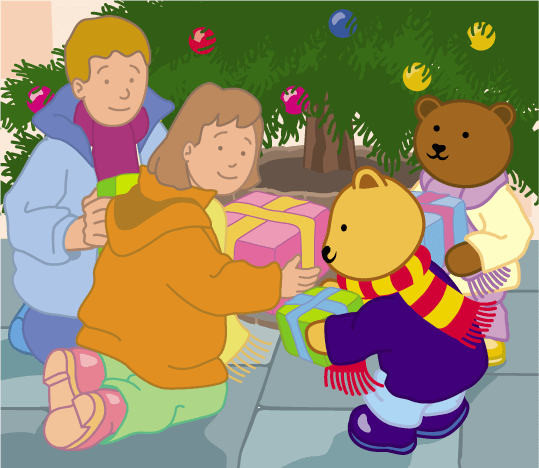 Teddy Horsley and Betsy Bear join with the people of God in bringing their gifts to celebrate Jesus’ birth. 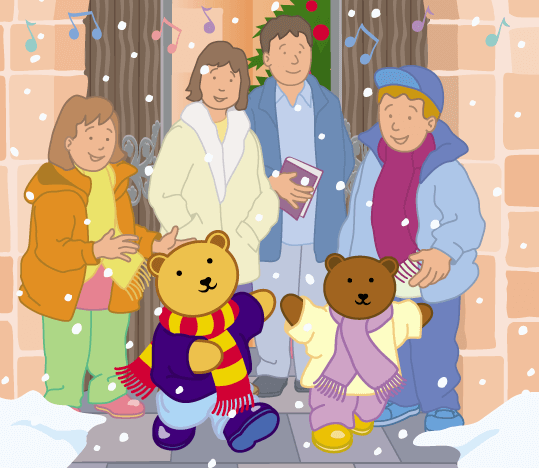 It is Christmas day and Teddy Horsley is a very excited bear.